Adopted at birth, filmmaker Jeff Togman doesn't know who he is - literally. But when Jeff's own children are born, it unleashes feelings of abandonment he never knew he had, and compels him to search for his biological parents.

In We're Not Blood, the personal quickly becomes political, as Jeff finds himself in the middle of a nationwide legal battle that has sealed the birth records of most adopted people, including his own. Jeff recruits a team of friends and experts to help him find his birth parents. Their desperate search for clues up and down the east coast leads them to rap-star DMC, an abandoned Catskills resort, the New Jersey State Legislature, the streets of Miami Beach, and the coke-dealing, police-fleeing attorney who handled Jeff's adoption.

Complicating matters, Jeff feels that even asking him mother about his biological parents would be an act of betrayal. His mother, brother, and uncle remind him of the special love his long-deceased adoptive father Hal had for him. As the case grows ever more complex, Jeff realizes that his search is about much more than finding his biological parents, even as he closes in on the woman who might be his mother.

A feature-lenth nonfiction film, We're Not Blood combines personal documentary with story-driven narrative to produce a suspenseful tale that tackles universal questions of identity, family, and memory, and wrestles with the most basic of human rights - the right to know where you come from, and who you are. 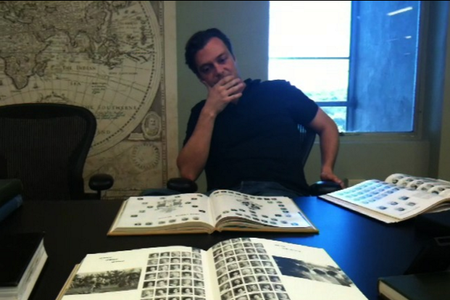