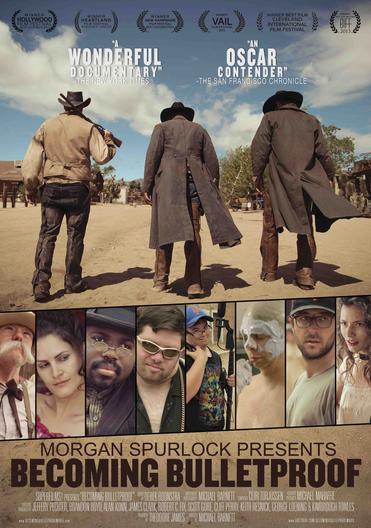 'Becoming Bulletproof' is the story of how four very different people with disabilities from across America take on leading roles in an ambitious indie film production, to make a Western entitled 'Bulletproof', complete with authentic Western wardrobe, saloon brawls, showdowns at the poker table, and evil villains. 'Bulletproof', is the brainchild of brothers Will and Pete Halby from Vermont, who run an annual film camp in Venice Beach, California. As Will Halby explains, filming 'Bulletproof' isn’t about actors’ limitations, “It’s all about making an awesome movie, not a statement.”

A.J. Murray, 30, from Atlanta, who has severe cerebral palsy, plays the town’s mayor. Jeremy Vest, 27, born with Williams Syndrome, plays the film’s hero, Bulletproof Jackson. Zach Gottsagen, 20, who has Down’s Syndrome, plays gambling mogul Gar Vunderson. Judy Moscariello, 51, who has cerebral palsy, plays a woman shattered by her lover’s murder. Weaving between 1890s period drama and present-day action, Bulletproof’s snaking plot requires mastering lines, pushing through take after take, and showing up on time in costume. As A.J., Jeremy, Zach and Judy grapple with these high expectations, 'Becoming Bulletproof' shows cast members setting aside their own needs for the greater goal of making a movie. The pay off is the creation of a community spirit in which able-bodied and disabled actors create both a riveting film and a transformative experience. Engaging a wide audience, 'Becoming Bulletproof' is a film about striving to become a full human being through artistic endeavor and raises important questions about the exclusion and marginalization of disabled people from our wider culture.

In this film we see that disability is not the story of someone else: it is our story, of who we are or may become. Full of expressive and intimate voices, 'Becoming Bulletproof' takes us inside the filmmaking process to reveal vibrant human bonds, hilarious musical interludes and powerful insights. As A.J. himself says: “Sometimes people's standards for me or people with disabilities are low, and I just want everyone to know to just give everyone, regardless of disability or not, it's ok to raise your standard. You haven't seen nothing yet. Expect a little bit more and people with disability will surprise you. I want my legacy to be I want disability to be the norm. I want us to have a seat at the table in pop culture.