In 2009, 1,176 Atlanta teachers were investigated for test cheating; 35 were indicted, 12 went to trial and 11 were found guilty on RICO charges, which are typically reserved for the mafia and drug lords. The guilty, serving 30-year sentences, finally break their silence in this tell-all, controversial film that takes a closer look at the legislation called No Child Left Behind, the politics behind it, and a race and power struggle that spawned one of the most complex scandals in American history.

Directed by Emmy Nominated Producer Jodi Gomes, the harrowing documentary film, One Child Left Behind: The Untold Atlanta Cheating Scandal brings the accused, whistleblowers, cheaters, and innocent together on film for the first time to tell the real story. The US Education debate takes a front seat in this harrowing, investigative film that will leave many wondering how our education system could be so blind.

A Story of Courage
by Ariana Feiner - USA - 6 min.

Ariana Feiner shares her story with her rare metabolic condition, Hypoparathyroidism. She spreads her message of hope through her work with her children’s book for kids with chronic health conditions, Ariana Rose: A Story of Courage. Ariana exemplifies that it is not our obstacles that define us; it's the way we face them.

One Child Left Behind: The Untold Atlanta Cheating Scandal 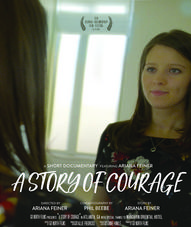